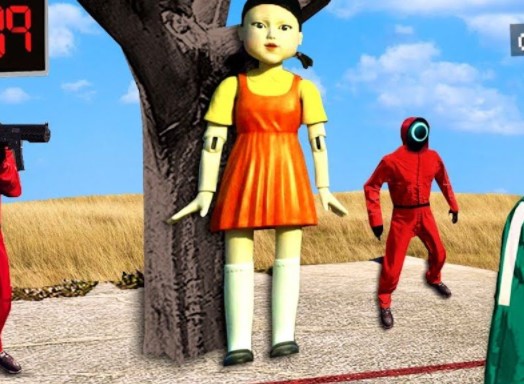 Each of us is ready for reckless actions, finding ourselves in a difficult financial situation. It is well demonstrated by the sensational Netflix series – Squid Game. But sometimes, the price turns out to be incredibly high. So it happened in this story too. A group of people is invited to take part in a run for a cash prize. Everything seems more than simples – players need to cross the wheat field and reach the giant robot doll on its opposite site. The reward will be given to the participant who is the first to complete the run. But there is a small nuance that turns everything upside down. No one warned the players that they would have to adhere to the rules of a simple child’s game – you can only move forward when the light is green, and during the red light you need to stop. And even this rule is not as terrible as the punishment for breaking it. Armed soldiers, surrounding the location are not placed there for guarding the event. They will shoot as soon as someone takes the wrong step. And only one player has a chance to remain alive after this deadly run. Now, you have a great opportunity to become one of the runners on the field. Are you ready to fill some thrill? Then join this game immediately. Everything is recreated exactly as in the TV show – all participants are wearing green clothes and the soldiers are in red suits. You will see a light indicator – do not forget to closely watch it and move when it is allowed. And hurry up- the clock is ticking all the time and you need to be in time before the last minute passed. Good luck in this fatal run – do your best to complete it alive.